Disclaimer: The thoughts and opinions are my own. As of now, I have never been involved professionally with Ghost or Wordpress Team.

It's been almost three months since this blog has been migrated to Ghost. Previously, it was managed with WordPress which had been the "De-Facto standard" for maintaining self hosted blogs. Recently, technologies like Ghost, Medium, Jackyll,etc have been developed as an alternative platforms.

Ghost is targeted for a very niche crowd. The sheer simplicity of this blogging platform intrigued me when it was started as a Kickstarter campaign. After running a test blog on my local machine for a couple of months, I made a decision last year to migrate this blog from WordPress to Ghost.

Moving from a Shared host to a Cloud host:

Installing Ghost has been a very big learning experience for me. I have never configured a VPS or Cloud Server.
Having heard of Digital Ocean from many developers, I thought to give it a try. I must say the documentation and support team is flawless.
My requirement was quite precise. I needed PHP, Node, Nginx and a Ghost blog. I found following topics useful while installing and configuring my server.

A lot of functionality has been stripped away in favour of simplicity. This platform is aimed at publishers who want to simply publish their content with least amount of features, gimmicks, and plugins. The Ghost Editor is quite eloquent as well. 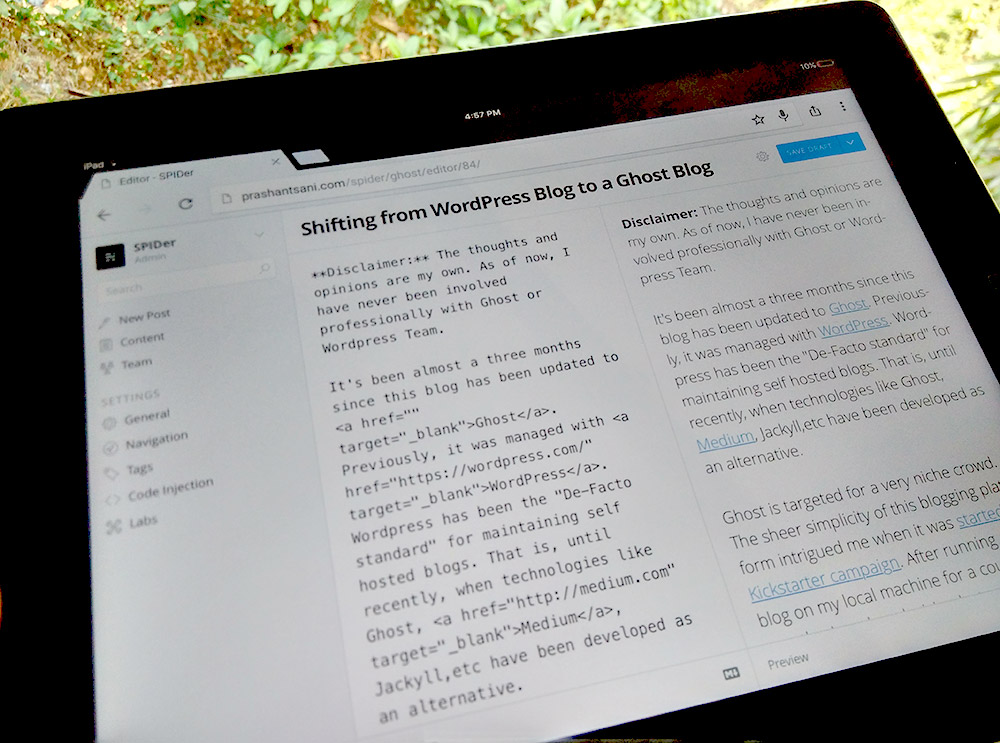 Content in Ghost blogs is managed with the help of markdown. It's a very popular way of writing down plain text with some symbols like #,*, etc. Ghost has an astounding text-editor which works smoothly even on handheld devices.

One of the features that I miss from WordPress is the "Media Library". Having a media library was a very convenient way to add images to posts.

There are many core functionalities that are not included in the technology as of now. For instance, there is no search or commenting functionality by default.
However, this can be achieved by adding Google Custom Site Search and disquss respectively.

Ghost backend is built using NodeJS. Building Themes in Ghost is quite simple for front-end developers who are well aware of HTML5, CSS, Handlebars, and JavaScript.
I will be releasing a custom theme for this blog next month.
As for the platform is concerned, I have really high hopes for the team. Hopefully, we will have a built-in search/comment system and an elegant dashboard in place soon. 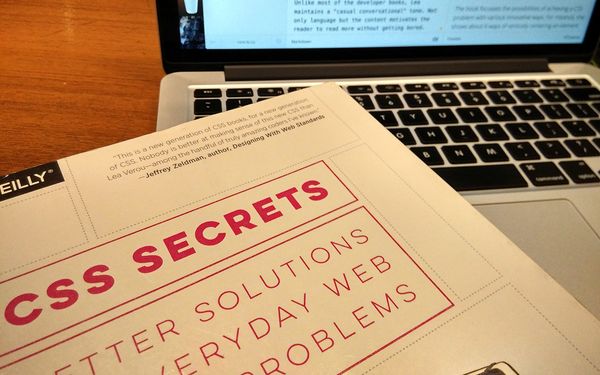 (tldr; If you are a Front End Web Developer, BUY THE BOOK 😀 ) Last year, Lea Verou, acclaimed front-end developer, released one of the most anticipated books, "CSS Secrets"

The month of September was quite eventful for me. I rejuvenated my creative & technical skills attending events like Google For Mobile, JSFoo, ON's #HeathyIsYummy Workshop and Creative Mornings. Thanks